We all want to be as fit and healthy as we can be and to help with that most of us take a multivitamin daily.  We hope it will improve the way our bodies function but most of us are unaware that there are some dangers posed by taking multivitamins.  Multivitamins tend to contain a mixture of vitamins and minerals.  Most of the problems occur when people take too high a quantity of their vitamins or they mix their multivitamins with other supplements.

What Quantity of Vitamins and Minerals Do We Need?

You may have heard references to something called the Recommended Daily Intake (RDI).  This is set by the Food and Nutrition Board of the Institute of Medicine in the United States.  It is calculated to show how much of a particular nutrient is enough to meet the requirements of 97.5% of healthy individuals in each life-stage and sex group. By checking how much of your RDI you are getting from your food you can make sure you don’t get too much of any particular nutrient.

Labels on food should include in the list of ingredients how much of the RDI is in the product.  Sometimes this is shown as a percentage of the RDI but it is more helpful if it gives the amount. There are 3 types of units used to measure amounts of minerals and vitamins:

What Are The Specific Dangers?

While generally taking vitamins or multivitamins containing over the RDI is a bad idea, let’s take a look at some of the specific dangers of some of the vitamins people commonly take too much of.

Vitamin A and Beta-carotene

Smoking interferes in how the body absorbs vitamin A.  It was therefore thought to be a good idea to give smokers a supplement of vitamin A to compensate.  Several studies then found that those who regularly took Vitamin A were more likely to get lung cancer than those who didn’t.  One study of 18,000 cases showed 28% more lung cancers and 17% more deaths in smokers and who were taking beta carotene and vitamin A supplements.  A study started in 1992 had to be stopped early after four years as the group on beta-carotene and vitamin A supplementation had a 28% increase in lung cancer rates and a 17% increase in deaths, over 80 more deaths compared to the placebo.

Even for non-smokers too much vitamin A can be dangerous, affecting your bone strength, and if you are pregnant making it more likely that your baby will have birth defects.

It was thought that giving people at risk of cardiovascular disease vitamin B3 would raise their levels of “good,” or HDL, cholesterol.  However, the results of a 2014 study showed no reduction in heart attacks, strokes, or deaths but an increase in the likelihood of developing infections, liver problems, and internal bleeding.

The recommended daily amount of vitamin B3 is 14mg for women and 16mg for men and the maximum dose is 35mg a day, unless advised by a doctor.

Folic acid is essential for women of childbearing age as it helps the development of babies and prevention of birth defects.  However research has shown that after going through the menopause continuing to supplement with folic acid was causing women health problems.  For example a study of postmenopausal women in the U.S, found that taking folic acid for 10 years every day increased their risk of breast cancer by 20%.

The recommended intake of folic acid for postmenopausal women is 400 micrograms (0.4mg) and the maximum amount is 1,000 micrograms (1mg)

A common vitamin that people tend to over dose on is Vitamin C.  Due to it being a water soluble vitamin there is a belief that you can’t overdose on it as any excess will be flushed out in your urine.  Since it is traditionally thought to ward off colds, many people will take extra Vitamin C on top of their multivitamin, especially in winter.  In actual fact, research has consistently shown that Vitamin C does next to nothing to protect you from colds. However if you are taking 2,000 milligrams or more of Vitamin C it can raise your risk of painful kidney stones.  Even if you aren’t taking your Vitamin C in that big a dose, regularly taking Vitamin C over the recommended amount can lead to nausea, diarrhoea and stomach pains.

The recommended daily amount of vitamin C is 75mg for women and 90mg for men with a maximum of 2,000mg.

There is still a lot of discussion among experts as to how much vitamin D we need to take as a supplement.  Since we mainly obtain vitamin D through our skin and the amount we get depends on many variables it is difficult to estimate how much we should take orally. You can’t overdose on the vitamin D you get through your skin but you can if you take it as a supplement. Having too much vitamin D can cause vomiting, poor appetite, constipation, weakness, and weight loss. Too much can also lead to a build-up of calcium (hypercalcemia) causing confusion, disorientation, problems with heart rhythm and kidney stones. 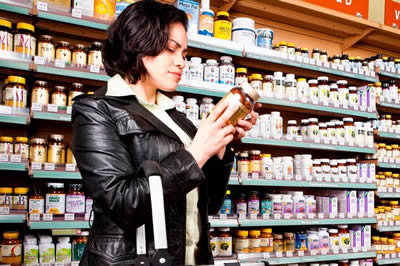 Researchers were very excited about the possibility that vitamin E could protect against cancer. However the opposite has proved true in some case.  For instance, a study of nearly 36,000 men in 2011 found that the risk of prostate cancer actually increased among the men taking Vitamin E compared to the men taking a placebo. A study in 2005 linked high doses of Vitamin E with an overall higher risk of death. Too much vitamin E can cause blood thinning and an increased risk of haemorrhagic stroke, or a stroke caused by bleeding in the brain.

The maximum amount of vitamin E you should take a day is 1,100 mg and the recommended amount is 15 mg.

As you can see, while we may take a multivitamin to improve our health there are dangers it could harm it instead.  It is sensible, therefore, to check you are taking the recommended amounts for your age and sex and never to exceed the maximum level.